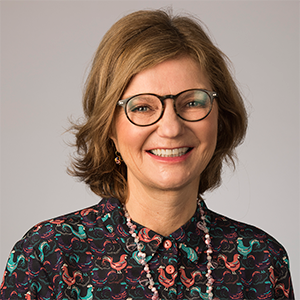 This year’s third place winner, chief digital and information officer of Australia's public broadcaster, Helen Clifton and her her 650-plus team within Product & Content Technology (P&CT) have presided over a set of viewing and other numbers that would impress even the most hardened of 'commercial' media barons.

And all of this in the face of genuinely unique technical, geographic and cultural challenges.

Chief digital and information officer for just over four years, Clifton has been on the frontline – and at the boardroom table – as the public broadcaster sought to deliver on its charter to not only entertain and inform us all, but also to protect us, at the same time pivoting to accommodate new devices, delivery mechanisms and viewing habits.

Reflecting the times, not just for the media industry but society more broadly, the jewel in the crown is the ABC iView App.

Several years of intense, iterative development – most recently including the addition of HTML5 components – have seen the app now synchronised across virtually all digital devices making it one of the most widely accessed content services in Australia.

“The app also has adaptive video streaming, ensuring higher quality streams are more reliable over slower network connections, while the launch of sub-profiles in May 2021 means users can receive tailored experiences,” Clifton explains.

ABC iView is now the No. 1 broadcast video-on-demand service in Australia, with a 27% share in June 2021.

Throughout June–July 2021, the app had over 2 million weekly active users, up from a year-to-date average of 1 million weekly users in 2019. It also has over 4,000 hours of content, with a strong focus on Australian programming.

Further demonstrating its ability to garner audience metrics the envy of commercial media companies, the ABC’s Triple J App has grown from having a limited online presence two years ago to becoming what Clifton now describes as a “digital powerhouse in 2021, driving strategy for the triple j brand and orchestrating change within the ABC”.

Launched originally as Double J in the 1980s, Triple J is the ABC’s flagship brand, broadcasting music and entertainment news about local and international artists from every major Australian city, and drawing massive audiences through its support of festivals and the iconic ‘Hottest 100’ and ‘Unearthed’ programs.

Through its connection to the iView app, Triple J is now a source of huge volumes of on-demand content such as podcasts, catch up episodes as well as live radio streaming.

Key features include playlists for music that appears on the Triple J radio stations, the ability to add songs to Spotify, Apple Music or YouTube music streaming services, and tools allowing audiences to interact with live radio, including polls and emoji reactions.

Clifton notes that since relaunching, the triple j app has grown its weekly users by more than 70%, elevating it to one of Australia’s most popular music apps in the Apple and Android app stores, with events like the Hottest 100 and Splendour in the Grass pushing it even higher.

The ABC has delivered world-class news and entertainment to untold millions of Australians since it was formed in 1932.

But what many people probably don’t appreciate is the critical role it plays connecting and supporting us in times of emergency.

The ABC Emergency Broadcasting website aggregates data from national and state and territory emergency services to create an Australia-wide view of emergency information and warnings – with a postcode entry, users can find out what’s happening nearby.

“The site covers everything from COVID restrictions to new incident types like earthquakes and tsunamis.

In October this year, it launched the ABC Emergency voice app for Amazon Alexa and Google Assistant, allowing for hands-free emergency updates for every town and suburb in Australia. The upshot is that anyone can get immediate information on their area without having to type into search boxes or navigation menus; doubtless a welcome change for anyone grappling with bushfires, tornadoes or earthquakes.

“Events such as the 2020 bushfires and COVID-19 underscored the need for the ABC to offer comprehensive digital services, such as the Emergency Broadcasting website, along with broadcast services,” Clifton says.

“Collaboration has occurred with emergency services in every state and territory, and the site has now attracted over 3 million page views since September 2020.”

In the four years, Clifton has been a tech leader with the ABC, the role of technology has evolved from being a means of delivery to now becoming a key “strategic asset”.

Fittingly, Clifton is also now a more important member of the ABC executive, eager to better understand the potential of digital technologies to drive success.

“My role is to explain and guide ABC executives and the entire organisation on how to be successful and thrive in a digital world,” she says.

A key part of this is P&CT delivering on 10 success measures and accompanying metrics that have been identified to track our progress and performance – all aligned to P&CT’s strategic pillars and the ABC’s Five-Year Plan.

“To achieve this, P&CT invests time with ABC content leaders to gain an in-depth understanding of their business realities on the ground, along with a nuanced and detailed understanding of audience issues,” Clifton adds.

She attributes part of her success to always striving for a ‘kitchen table’ style of communication with the ABC’s various divisions, ensuring that everyone gets a “clear, easily understood and achievable” vision of what technology can accomplish.

“This includes showing that value is created not only by the technology, but by what we do with the investment,” Clifton notes.

“Discussing and describing the capability of technology to transform the ABC in a way that resonates is incredibly important, rather than simply having a conversation about the technology itself.”