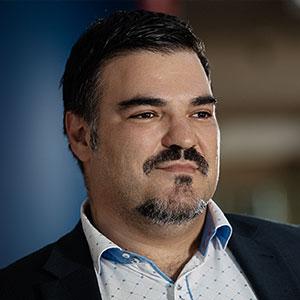 Since joining the University of Newcastle in 2016, Anthony Molinia has created a modern, robust and sustainable IT infrastructure to meet the current and future needs of the university and create differentiation within the higher education sector.

As part of a longer-term digital strategy, initiatives have been targeted to enhance learning outcomes to support the development of work-ready graduates, improve student and staff experience, and generate enterprise value strategically and operationally.

To produce life-ready graduates, Molinia and his team rolled out virtual and augmented reality technologies to create realistic scenarios that would otherwise be difficult or impossible to recreate in the classroom.

In an Australian-first, the university launched cyber security labs that help students learn in a real-world, simulated environment. Researchers and students conduct security projects in a partnership with industry and government to assess different types of cyber threats and ways to mitigate and resolve them.

Since 2018, Molinia, representing the university, has worked with IBM on the formation of a global blockchain network called the Learning Credentials Network. The purpose of this network is to create an ecosystem of participants to share skills between learners, employers and education providers.

An optimisation and automation strategy is also driving process efficiencies across the university. Staff time is being freed up to allow greater focus on value-add activities, errors are being reduced, and staff stress decreased. The indirect benefit is an enhanced student experience, Molinia says.

“Automation has saved up to 6 FTE [full-time equivalent] of manual staff effort since commencing, allowing them to focus on more value-added work,” he says.

In 2018, Molinia also established an ‘adoption function’ to increase awareness and utilisation of technology available to staff and students.

Meanwhile, the university’s migration from an onsite data centre to the cloud was a first for an Australian university. This required Molinia to champion the cloud across the university since the standing position was to rebuild another data centre.

Migrating to the cloud has enabled the university to decommission 25 per cent of its applications, enhanced its cyber security posture through near real-time monitoring, and provided self-service provisioning, which has reduced delivery time from 8 weeks to 6 minutes.

The move to the cloud has also resulted in a 20 per cent improvement in operational costs relative to infrastructure and staff costs, reduced technology debt and enabled researchers to choose standard storage, compute and tooling capabilities within having to engage IT services.

As a member of the executive team, Molinia’s role has required him to shift the perception of IT services from a low-level service provider to a strategic partner. He increased IT maturity with the organisation, created stable leadership (there were five CIOs in four years), and he obtained executive level support for an IT restructure and cultural shift which is not typical in the higher education sector.

Compared with its peers in the sector, the university is under-invested in IT by an average of 13 per cent even though a 44 per cent uplift in IT investment has been achieved since Molinia was appointed to the role in 2016.

Molinia says the university was in a strong position to respond when the COVID-19 pandemic hit Australia.

“Our IT infrastructure was designed for agility and responsiveness to market demand. While the strategy was not written to address the needs of the pandemic, it meant that the university was ready for disruption and able to move to remote learning, teaching and working within 48 hours using resources already in place,” he says.

During the pandemic, Molinia has led the IT services team through the introductin of a new capability and operating model to improve culture, uplift the capabilities and introduce critical process redesign.

Under the model, ‘culture fit’ was introduced as a key selection criteria within the recruitment process. Capability uplift is supported by an approach of learning by doing (70 per cent of the time), learning through coaching, mentoring and partnering (20 per cent), and formal education and training (10 per cent).

“Our staff are also making recommendations for process design. Early indications show a 70 per cent reduction of the approval steps in some of the key processes. Implementation will follow in the coming months and will be constantly evolved to align to the iterative constant learning approach,” he says.

Finally, Molinia has capitalised on the requirement to physically relocate by bringing the tech team into a single building, from 6 previously, and introducing a new team-based style of working that will support the new organisational structure and enable an open, more collaborative culture.